A Fallen Officer and Marine 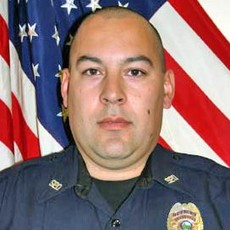 Susanville and the surrounding areas have suffered a monumental loss. Officer Rob McElrath was shot and killed on January 2, 2011. Everyone is invited to honor the life of Rob with a Candlelight vigil Tuesday, 7pm at Banner Lassen Medical Center. Please bring your own candles.

Rob served as a United States Marine before starting his law enforcement career. He started his career in Lassen County as a Correctional Officer, and a Reserve Deputy before he became a Deputy Sheriff. He later joined the Susanville Police.

Joanna McElrath, Rob's wife and her boyfriend, Robin Glen James have been arrested and are await arraignment scheduled for Monday. The Susanville Police department have called on the assistance of outside law enforcement agencies to assist in their investigation leading up these arrests. Read Sheriff-Coroner Dean F. Growdon remarks here. You can read the Coroner's office official statement regarding the investigation here.

My thoughts and prayers go out to Rob's family. I know Rob will Guard the Gates To Heaven proudly.

UPDATE: Rob McElrath's funeral procession will be held on Saturday, January 15th at 10:40am beginning at the Lassen County Fairgrounds and ending at Susanville Assembly of God Church on Richmond Road for a public memorial.
Posted by Unknown at 7:28 PM

Email ThisBlogThis!Share to TwitterShare to FacebookShare to Pinterest
Labels: Marine

wow, i just read this im shocked this is very sad to think people have to fear their life after they sacrifice & fight for the freedom of our country, still sacrificing & trying to protect, a true Marine, God Bless this family friends & loved ones during this very difficult time. Semper Fi