How Words Saved A Life

It seems silly to think something intangible like words could save a life, but it's true. No, words cannot stop a wound from bleeding, but they can heal. Recently while talking to one of the many friends I have made through Words For Warriors on the phone, my friend asked me, "Do you know you saved my life?"  I was a little taken back. I stopped tunneling through the pile of laundry I was wrestling to think about what he had said.  I asked him what he meant.  He told me how when he was on his third deployment he had decided he was tired.  He had nothing to come home to. No wife, girlfriend, lover, children, not even a plant.  He would be coming home to an empty house.  He had all of the insurance papers taken care of, so his sister could put her kids through college with the money.  He was ready, he was plotting his "accident" as the end of his tour approached. He took his scheduled R&R at the USO in Qatar where he saw the very first batch of letters from Words For Warriors for Veteran's Day. He decided to answer the 3rd graders questions about what the weather and food was like, sending me an email to pass on to the students.  I of course responded, and a friendship through email was quickly born.  Through those emails I shared pictures and stories of my family, and my life. As we became friends he realized that I cared. If he had an "accident" it would hurt me, because I cared, someone he had never met cared, and if a stranger cared, then maybe he was worth caring about.

He has been home for almost 6 months. He has a job, a girlfriend that he calls me for advice when he plays his stupid man card and needs to know how to fix it. He is doing well and looking forward to the future. A future he wouldn't have if it weren't for those letters. He said to me, "Thank You. Thank you for sending those letters, for caring, and for saving my life."
I honestly had no idea what those letters and my friendship meant to him until that moment. I was utterly and completely speechless, which if you know me doesn't happen often. What do you say to someone who tells you, you saved their life?
I am sharing this story because it shows how taking a few minutes to write a letter can bring about new friendships, and maybe, just maybe save a life. 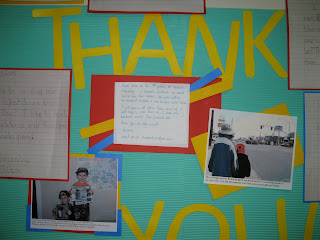 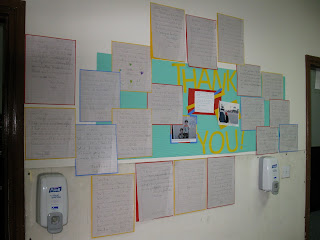 These are the Veteran's Day Letters at the USO in Qatar that helped save my good friend.
Posted by Unknown at 3:56 PM

Email ThisBlogThis!Share to TwitterShare to FacebookShare to Pinterest
Labels: Save A Life, Support from home, Support Our Troops