While on vacation with my family in Australia,  I remembered a conversation I had with a Canadian reader about  how supporting the men and women who fight for freedom is not limited to America, or any single country. Men and women from many countries have spilled blood. I'm pretty sure it's all the same color, and equally valuable.   Below is the War Memorial in Canberra, Australia where the Australian's honor their men and women who have paid the ultimate sacrifice. 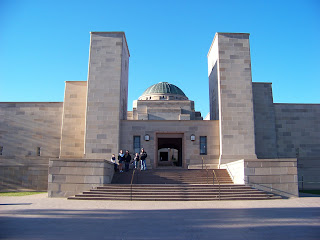 The War Memorial in Canberra is in tribute to those Auzzies and Kiwi's who fought in the various War's throughout history.  Unfortunately my family and I couldn't experience the entire Memorial because we needed to catch a train, but it is most definitely on our list of places to see again.

There is a long road between the War Memorial and Parliament House, interlocking the two.  For you can't stand on the steps of one, without seeing the massive form of the other. 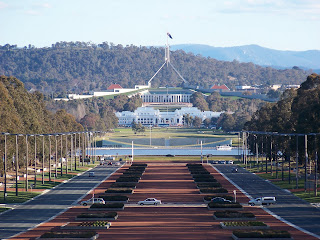 Parliament House as seen on the steps of the War Memorial. The long road holds small individual memorials to WWI, WWII, and Vietnam.

Inside there is a pool and an eternal flame to honor those who made the ultimate sacrifice surrounded by a Roll Of Honor which consist of bronze panels inscribed with the names of men and women who died dating back to 1850 up to current wars in Iraq and Afghanistan.  Family and friends leave red roses. 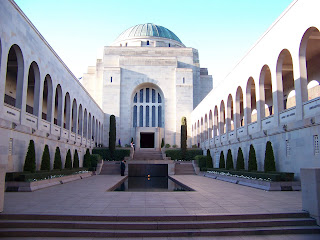 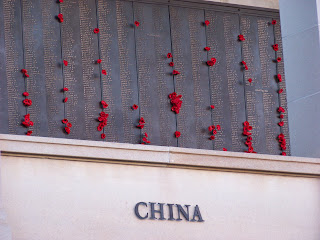 Once inside the Memorial we were exposed to magnificent maps, large scale dioramas, paintings, pictures, and artillery from the various Wars Australians have participated in.  In one room there were 3 full size fighter jets from WWI and a few vehicles.

The Tomb Of The Unknown Australian Soldier is a humbling experience. School children are invited every Tuesday, Wednesday, and Thursday to a wreath ceremony and a conversation with a Veteran. This program is to keep the youth involved with their history. 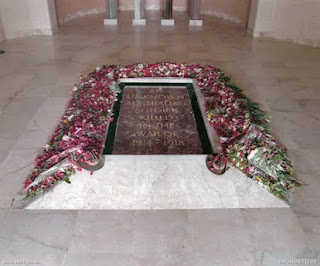 It wasn't until after we left, I realized Australia is a country the size of the USA, but with less people than California populating it.  They don't have a huge Army, but I have no doubt its honorable. I am very impressed with the monument the Australians have built with distinction and look forward to experiencing it again.

It is always sad to hear of a death, a life cut short from war.  While in Australia the 18th Australian was killed in Afghanistan.  His name was Jason  Thomas Brown. I encourage you to read more about him here, for soon his name will be added to the bronze panels at the War Memorial.
Posted by Unknown at 10:46 PM

Great photos and info on an amazing, and expansive war memorial. Very interesting architecture with a strikingly Middle Eastern feel to it. And, I agree, anything to do with the "unknown soldier" is humbling... and moving.
Note: Australia, like Canada, has been sending troops overseas since the Boer War in South Africa to present day. At the time of the Boer War, our countries were called to arms by....England, if I remember that correctly. The politics have changed since then, but pretty much anywhere you have seen the UK sending troops, you will see Canada, Australia, New Zealand...now whether this has to do with being a constitutional monarchy recognizing the sovereign of the UK or as members of the (formerly British) Commonwealth, I have no clue...

Spockgirl~ You are correct, Australia, Canada, and New Zealand were called to arms by England for the Boer War, and a few others. It was interesting to learn about the politics of those days, and how it's changed today.

The architecture as well as the history of Canberra is very unique. Apparently the Australian's couldn't agree on where their capital should reside, so they created Canberra to solve the problem. An international contest was held. Chicago architects, Walter and Marion Griffin's blueprints were chosen. Over the last 97 years their plans have slowly been put into reality giving Canberra a unique feeling, for no road or government building is an accident.