Can Twitter Help Words For Warriors Succeed in Our Mission?

When a milblog friend of mine suggested Words For Warriors get on Twitter… three times I decided to check it out.  I had thought of Twitter as a teenie bopper texting waste of time. I signed up, started poking around, and wished my tiny town had a bookstore so I could get a Twitter For Morons book.  I had no clue what I was doing.


I quickly found the community very accepting and helpful when I explained my newbie status before asking a question about the meaning of an abbreviation.  The people I communicated with, Active Duty Service Members, Veteran’s, Military Supporters, and Non Profits were all very friendly, full of information and ready to help promote anything Words For Warriors.
It was through Twitter that Shannon Evans author of The Definitive Twitter Guide contacted me regarding a Veteran issue she needed help with.  I had no idea who Shannon was at the time, or that she was an author, she was just a person I was trying to help.  When I saw a tweet about her book, I thought, “I’d like to read that.”  I contacted Shannon and the book arrived shortly after.
The Definitive Twitter Guide is an excellent book for those who need a step by step through Twitter’s inner workings and for the experienced Twitter users of businesses and non-profits.  Shannon shows how using Twitter can help businesses and non-profits grow to their full potential and flourish.
In a world where human contact seems to be endangered, the focus of Twitter is to actually foster human contact, support, and information on a direct personal level without having to share personal information, like a phone number.  Shannon shows several good and bad examples of businesses and non-profits that use Twitter for customer service issues, feedback, and an informational delivery system.  As Shannon points out, “In the days of print, TV, and radio, there was only one-way communication with potential customers.  There was no place to have a two-way conversation that built relationships and encouraged dialogue.”
It is the relationship building, dialogue, and forced transparency of businesses and non-profits that make Twitter unique; after all, one negative tweet about a company or brand can reach thousands in just an hour or less.
This fast paced information environment means information moves at the speed of light to thousands of users, The Definitive Twitter Guide shows a company or non-profit how to use Twitter to further their brand, but also how to use other free applications to make their content search engine friendly to their customers as well as trackable by their company.
The few suggestions I have implemented from The Definitive Twitter Guide have helped Words For Warriors gain valuable support from people, non-profits, and businesses around the world that we would never had access to before.  I plan on implementing more suggestions, and look forward to the lasting success of Words For Warriors in meeting our Mission.  Making sure no solider feels forgotten.
Follow Words For Warriors on Twitter:  www.twitter.com/words4warriors
You can find Shannon Evans:
Twitter: www.twitter.com/shannonevans
LinkedIn: www.linkedin.com/in/pshannonevans
Email: Shannon@practicallocalsearch.com 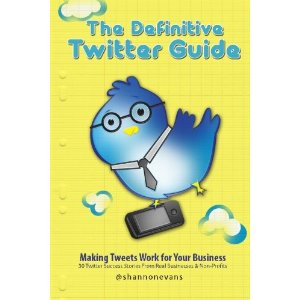 Good question...but I'm not the one to ask...I don't twit,facebook, or even know how to blog.

Wow! What a wonderful review of my book! You and other nonprofits are doing such an important job of getting the word out that there are so many people out there serving many in need. Your work here for warriors is just amazing and I am thrilled that my humble efforts in my book are helpful for your continued efforts.
With warmest regards,
Shannon Evans