I am ashamed to admit, I was once plagued by the apathy I am working so hard to eradicate around me. I once walked blind in a world of abundance with no thought to those who have been fighting in Afghanistan and Iraq these past ten years.
Reconnecting with a lost friend who had just begun his third deployment spurred my rebirth. It was when he confirmed most men and women who were deployed felt forgotten and wondered if "Anyone in America know we are still here?" that helped me shed my skin of apathy as my heart broke for each and every man and woman who deserves to be honored, respected, and celebrated for their service. Words For Warriors was born.
I have made knew friends, learned to look at the world with new eyes. I love nothing more than to know I have brought a smile to a strangers face with a letter or a care package. I have given the gift of knowledge to a service member that a perfect stranger thought about them. Honoring their sacrifices for our freedoms.
I also find pleasure in knowing I'm fighting the War of Apathy each and every time I get someone involved in Words For Warriors, have a teacher encourage there class to write letters or make artwork to be sent downrange. Children are our future, it bides well that they should be proud of their Country and those who defend it. The submissions for Operation Postcard re-enforces the pride children hold in their hearts for their Country. I hold the proof.
There are several social economic factors with elections in sight that could be spurring the rekindled recollection of the War's and the men and women who fight. Regardless of the reasons, I am noticing support for our Warriors in new places. Besides the American Flag being flown over homes, businesses, and public buildings, I have seen the MIA/POW flag flown at several locations on a daily basis. I have driven by more than one house in different cities paying tribute to loved ones who serve by plastering the names of their loved ones on the outside of their house.
Yesterday I was surprised and proud to find a Support Our Troops cake for purchase from Safeway. Today I found Veteran's Day cards in my local Walgreens, which are manufactured by Hallmark. I have never seen Veteran's Day cards before. I bought one of each, because I know just who to give them too.
There are a plethora of ways for the average citizen to give their support to our Warriors, which cost nothing to participate in. There are organizations like Words For Warriors, Soldier's Angels, and Operation Gratitude to name a few. Yes, all of these organizations need donations, but donating time by making crafts, or writing letters is equally as valuable as money. The recipients of the letters and crafts of support might even argue they are invaluable. The arduous economic times are no excuse for not getting involved.
Every Warrior makes a pledge to protect America, its citizens, and their brothers. I think every citizen should make a pledge to Honor, Respect, and Celebrate the lives and memories of the brave men and women who protect America and her citizens. 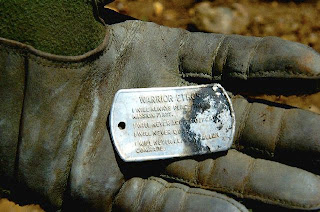 Email ThisBlogThis!Share to TwitterShare to FacebookShare to Pinterest
Labels: Support Our Troops

I think this is very beautiful, i can tell you are a very special person to do this for the people of your country, you have a enourmous heart and god will bless you for your kindness. Thank You & God Bless

Sonia~ knowing the journey you are currently walking, your words humble me. Sincerely, thank you.