Hope For The Future? 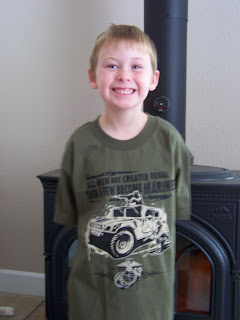 For those of you who don't know this is my son. He is 6.5 years old. Since he is mine, he is of course the smartest 6.5 year old out there. He accompanied me to the post office to mail some letters. The postal worker and I began talking. Somehow the conversation turned to protests in which one of us (I don't remember who) mentioned people burning the flag. At this point my son immediately snapped out of his own personal thoughts faster than if I had announced free ice cream for everyone and said, "Wait... people burn the Flag? My Flag? The one I say the Pledge Allegiance to everyday?"

I am not writing this story to get into the validity of burning the Flag, I am writing this to show the pride of a 6.5 year old boy who already refers to the American Flag as his flag. He is ready to defend his flag however he deems necessary. When your 6.5 that means a fist to the face (yes I asked.)  Even though as his mother I am not supposed to condone violence and hitting I have to admit, I do not think I could punish him for defending the American Flag.
Posted by Unknown at 5:29 PM

I'll take that kid on my team anyday. "His Flag"? Smarter than the average bear.